RUSSIAN military scientists have invented a miniature doomsday weapon which could be used by terrorists to hold the world to ransom.

The atomic device is the size of a grapefruit and can be fired like a grenade or hidden in a briefcase and smuggled across frontiers.

Terrorist states such as Iraq and Libya could pose a terrible threat if they manage to perfect the technology. 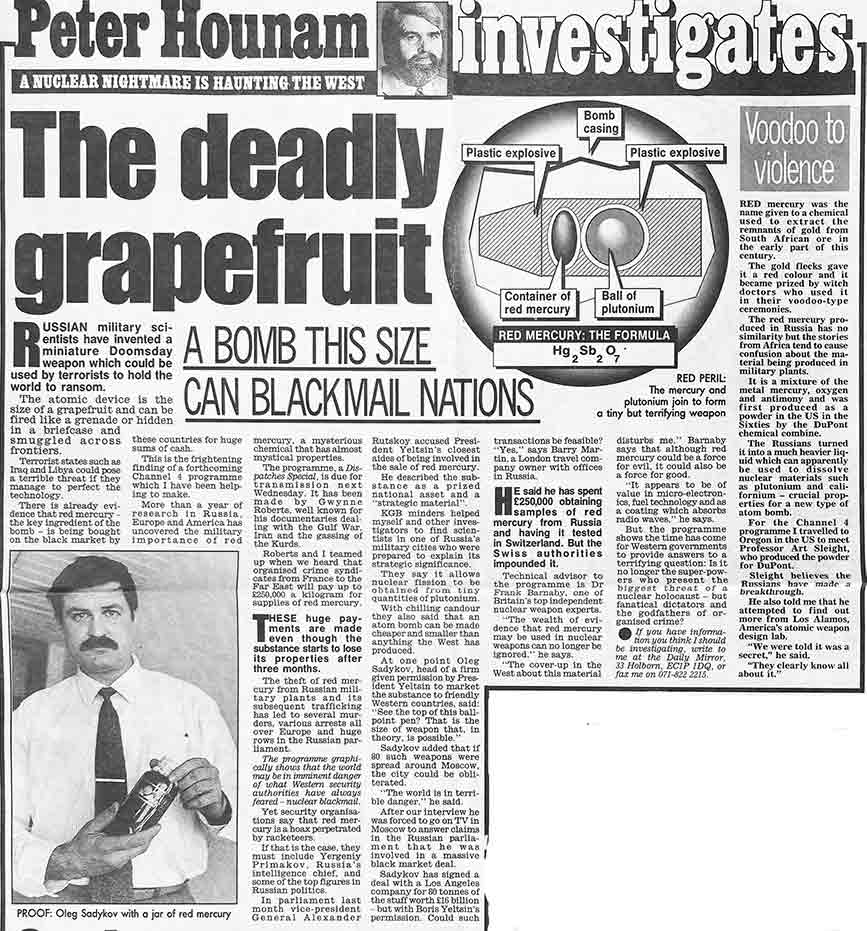 There is already evidence that red mercury – the key ingredient of the bomb – is being bought on the black market by these countries for huge sums of cash.

This is the frightening finding of a forthcoming Channel 4 programme which I have been helping to make.

More than a year of research in Russia, Europe and America has uncovered the military importance of red mercury, a mysterious chemical that has almost mystical properties.

The programme, a Dispatches Special, is due for transmission next Wednesday. It has been made by Gwynne Roberts, well known for his documentaries dealing with the Gulf War, Iran and the gassing of the Kurds.

Roberts and I teamed up when we heard that organised crime syndicates from France to the Far East will pay up to £250,000 a kilogram for supplies of red mercury.

Huge huge payments are made even though the substance starts to lose its properties after three months.

The theft of red mercury from Russian military plants and its subsequent trafficking has led to several murders, various arrests all over Europe and huge rows in the Russian parliament.

The programme graphically shows that the world may be in imminent danger of what Western security authorities have always feared – nuclear blackmail.

Yet security organisations say that red mercury is a hoax perpetrated by racketeers.

If that is the case, they must include Yevgeny Primakov, Russia’s intelligence chief, and some of the top figures in Russian politics.

He described the substance as a prized national asset and a “strategic material”.

KGB minders helped myself and other investigators to find scientists in one of Russia’s military cities who were prepared to explain its strategic significance.

They say it allows nuclear fission to be obtained from tiny quantities of plutonium.

With chilling candour they also said that an atom bomb can be made cheaper and smaller than anything the West has produced.

At one point Oleg Sadykov, head of a firm given permission by President Yeltsin to market the substance to friendly Western countries, said: “See the top of this ballpoint pen? That is the size of a weapon that, in theory, is possible.”

Sadykov added that if 80 such weapons were spread around Moscow, the city could be obliterated.

“The world is in terrible danger,” he said.

After our interview he was forced to go on TV in Moscow to answer claims in the Russian parliament that he was involved in a massive black market deal.

Sadykov has signed a deal with a Los Angeles company for 80 tonnes of the stuff worth £16 billion – but with Boris Yeltsin’s permission. Could such transactions be feasible? “Yes,” says Barry Martin, a London travel company owner with offices in Russia.

He said he has spent £250,000 obtaining Samples of red mercury from Russia and having it tested in Switzerland. But the Swiss authorities impounded it.

“The wealth of evidence that red mercury may be used in nuclear weapons can no longer be ignored,” he says.

“The cover-up in the West about this material disturbs me.” Barnaby says that although red mercury could be a force for evil, it could also be a force for good.

“It appears to be of value in micro-electronics, fuel technology and as a coating which absorbs radio waves,” he says.

But the programme shows the time has come for Western governments to provide answers to a terrifying question: Is it no longer the super-powers who present the biggest threat of a nuclear holocaust – but fanatical dictators and the godfathers of organised crime?