KEVIN “Acka” Atkins has just been released from jail after discovering that the armed robbery he committed was officially inspired – by the police. 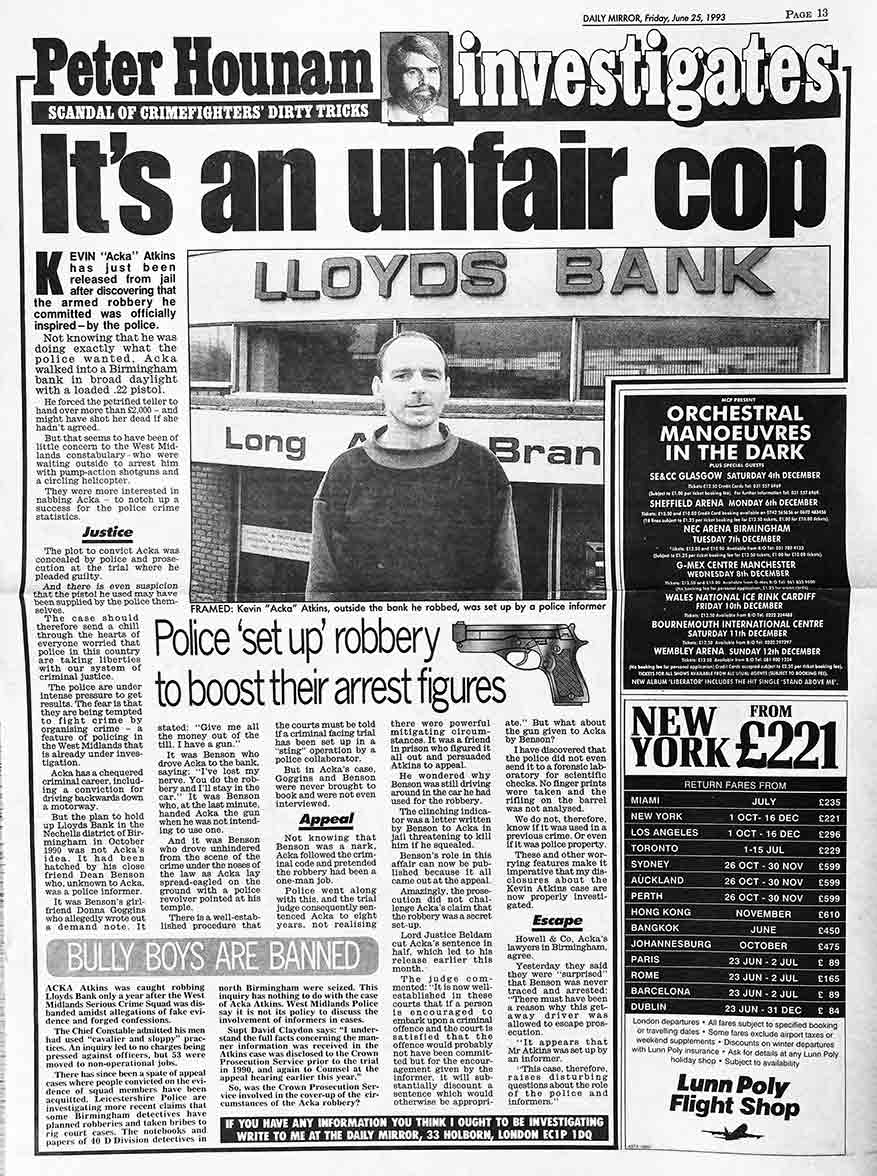 Not knowing that he was doing exactly what the police wanted, Acka walked into a Birmingham bank in broad daylight with a loaded .22 pistol.

He forced the petrified teller to hand over more than $2,000 – and might have shot her dead if she hadn’t agreed.

But that seems to have been of little concern to the West Midlands constabulary – who were waiting outside to arrest him with pump-action shotguns and a circling helicopter.

They were more interested in nabbing Acka – to notch up a success for the police crime statistics.

The plot to convict Acka was concealed by police and prosecution at the trial where he pleaded guilty.

And there is even suspicion that the pistol he used may have been supplied by the police themselves. 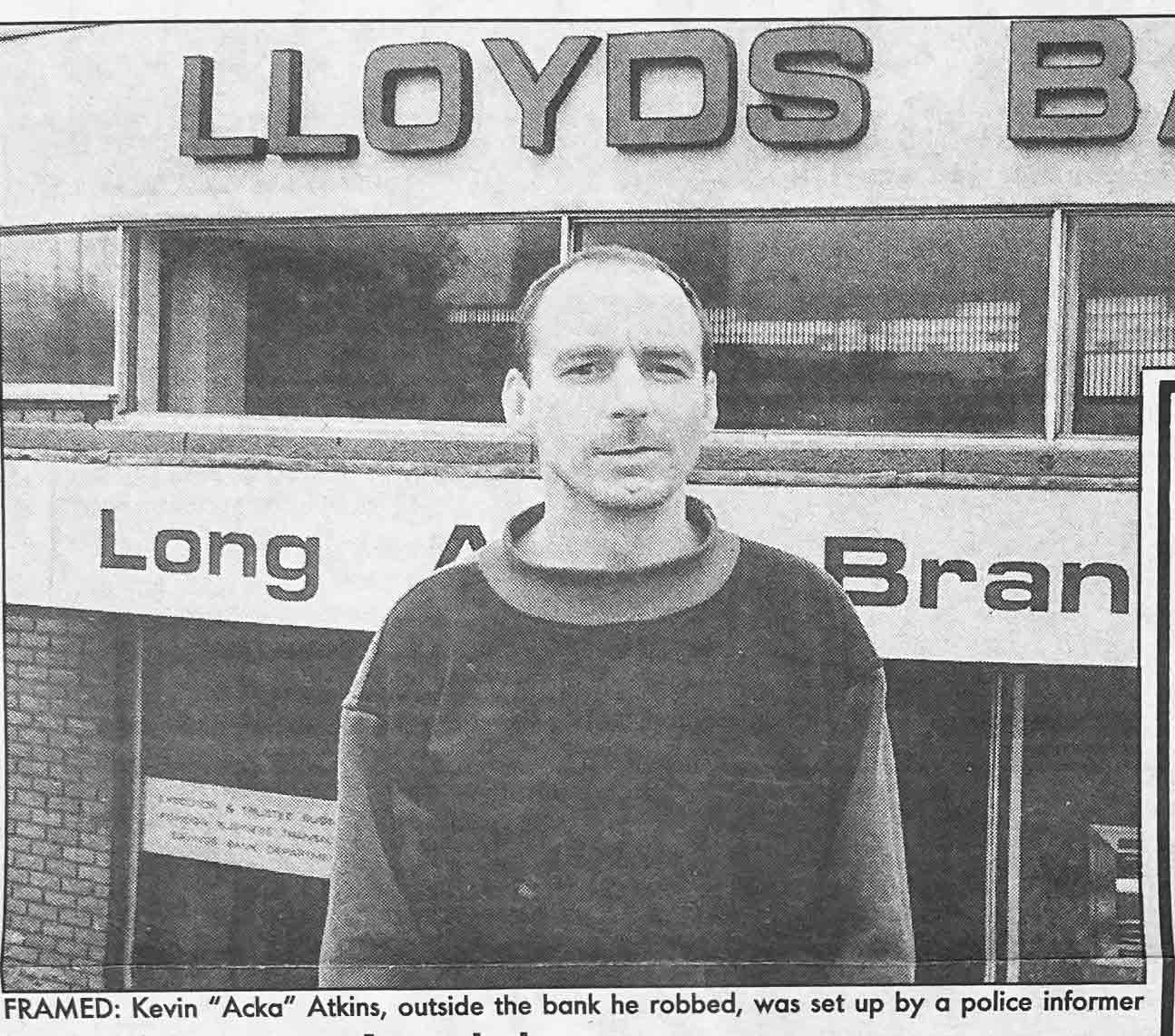 The case should therefore send a chill through the hearts of everyone worried that police in this country are taking liberties with our system of criminal justice.

The police are under intense pressure to get results. The fear is that they are being tempted to fight crime by organising crime, a feature of policing in the West Midlands that is already under investigation.

Acka has a chequered criminal career, including a conviction for driving backwards down a motorway.

But the plan to hold up Lloyds Bank in the Nechells district of Birmingham in October 1990 was not Acka’s idea. It had been hatched by his close friend Dean Benson who, unknown to Acka, was a police informer.

It was Benson’s girlfriend Donna Goggins who allegedly wrote out a demand note. It stated: “Give me all the money out of the till. I have a gun.”

It was Benson who drove Acka to the bank, saying: “I’ve lost my nerve. You do the robbery and I’ll stay in the car.” It was Benson who, at the last minute, handed Acka the gun when he was not intending to use one.

And it was Benson who drove unhindered from the scene of the crime under the noses of the law as Acka lay spread-eagled on the ground with a police revolver pointed at his temple.

There is a well-established procedure that the courts must be told if a criminal facing trial has been set up in a “sting” operation by a police collaborator.

But in Acka’s case, Goggins and Benson were never brought to book and were not even interviewed.

Not knowing that Benson was a nark, Acka followed the criminal code and pretended the robbery had been a one-man job.

Police went along with this, and the trial judge consequently sentenced Acka to eight years, not realising there were powerful mitigating circumstances. It was a friend in prison who figured it all out and persuaded Atkins to appeal.

He wondered why Benson was still driving around in the car he had used for the robbery. The clinching indicator was a letter written by Benson to Acka in jail threatening to kill him if he squealed.

Benson’s role in this affair can now be published because it all came out at the appeal. Amazingly, the prosecution did not challenge Acka’s claim that the robbery was a secret set-up.

Lord Justice Beldam cut Acka’s sentence in half, which led to his release earlier this month. The judge commented: “It is now well-established in these courts that if a person is encouraged to embark upon a criminal offence and the court is satisfied that the offence would probably not have been committed but for the encouragement given by the informer, it will substantially discount a sentence which would otherwise be appropriate.”

But what about the gun given to Acka by Benson?

I have discovered that the police did not even send it to a forensic laboratory for scientific checks. No fingerprints were taken and the rifling on the barrel was not analysed.

We do not, therefore, know if it was used in a previous crime. Or even if it was police property.

These and other worrying features make it imperative that my disclosures about the Kevin Atkins case are now properly investigated.

ACKA Atkins was caught robbing Lloyds Bank only a year after the West Midlands Serious Crime Squad was disbanded amidst allegations of fake evidence and forged confessions. The Chief Constable admitted his men had used “’cavalier and sloppy” practices. An inquiry led to no charges being pressed against officers, but 53 were moved to non-operational jobs.

There has since been a spate of appeal cases where people convicted on the evidence of squad members have been acquitted. Leicestershire Police are investigating more recent claims that some Birmingham detectives have planned robberies and taken bribes to rig court cases. The notebooks and papers of 40 D Division detectives in north Birmingham were seized. This inquiry has nothing to do with the case of Acka Atkins. West Midlands Police say it is not its policy to discuss the involvement of informers in cases.

Supt David Claydon says: “I understand the full facts concerning the manner information was received in the Atkins case was disclosed to the Crown Prosecution Service prior to the trial in 1990, and again to Counsel at the appeal hearing earlier this year.”

So, was the Crown Prosecution Service involved in the cover-up of the circumstances of the Acka robbery?

ACKA Atkins was caught robbing Lloyds Bank only a year after the West Midlands Serious Crime Squad was disbanded amidst allegations of fake evidence and forged confessions.

The Chief Constable admitted his men had used “’cavalier and sloppy” practices. An inquiry led to no charges being pressed against officers, but 53 were moved to non-operational jobs. 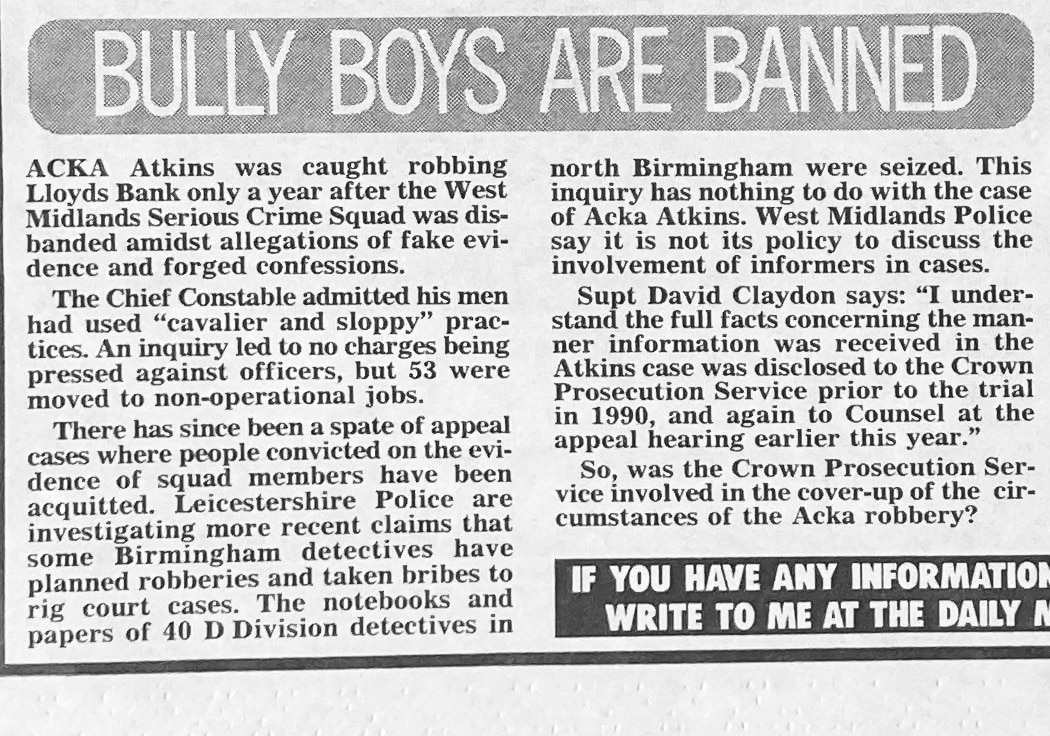