To many Western scientists, it is a hoax on the grandest scale – yet on the world’s black markets, flooded with the Soviet Union’s cold war detritus, it is known to have fetched up to £1m a pint.

There is growing evidence that countries such as Iraq and Libya, desperate for their own nuclear weapons, believe in it and will go to almost any lengths to acquire it. 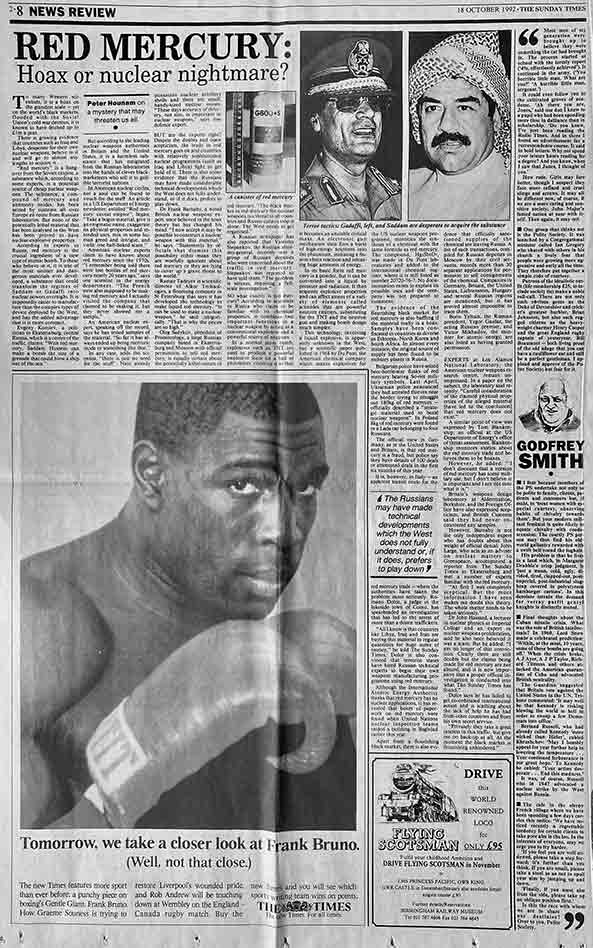 “Red mercury” is a hangover from the Soviet empire, a substance which, according to some experts, is a potential source of cheap nuclear weapons. The substance, a compound of mercury and antimony oxides, has been seized by customs all over Europe en route from Russian laboratories. But none of the potentially lethal material that has been analysed in the West has been proved to have nuclear-explosive properties.

According to experts in Russia, red mercury is the crucial ingredient of a new type of atom bomb. To those who believe in it, it is one of the most sinister and dangerous materials ever developed, a substance that could transform the regimes of Saddam or Gaddafi into nuclear powers overnight. It is supposedly easier to manufacture than the complex types of device deployed by the West, and has the added advantage that it is more compact.

Evgeny Korolev, a politician in Ekaterinburg, central Russia, which is a centre of the traffic, claims, “With red mercury, Saddam Hussein can make a bomb the size of a grenade that could blow a ship out of the sea.”

But according to the leading nuclear weapons authorities in Britain and the United States, it is a harmless substance that has emigrated from the Russian laboratories into the hands of clear black marketeers who sell it to gullible terrorist nations.

In American nuclear circles, not a soul can be found to vouch for the stuff. An article in a US Department of Energy newsletter, entitled “Red mercury: caveat emptor”, began: “Take a bogus material, give it an enigmatic name, exaggerate its physical properties and intended uses, mix in some human greed and intrigue and voila: one half baked scam.”

American nuclear experts claim to have known about red mercury since the 1970s.

“I remember being told there were lost bottles of red mercury nearly 20 years ago, “says one scientist in the energy department. “The French were also supposed to be making red mercury and I actually visited the company that claimed to be making it, but they never showed me a sample.”

An American nuclear expert, speaking off the record says he has tested samples of the material. “So far it has always ended up being mercuric oxide or something like that.”

In any case, adds the scientist, “there is just no need for the stuff”. Nato already possesses nuclear artillery shells and there are small handy-sized nuclear mines.

“These days accuracy of delivery, not size, is important in nuclear weapons,” says one defence expert.

BUT are the experts right? Despite the doubts and open scepticism, the trade in red mercury goes on and countries with relatively sophisticated nuclear programmes (such as Iraq and Libya) fight to get hold of it. There is also some evidence that the Russians may have made considerable technical developments which the West does not fully understand, or if it does, prefers to play down.

Dr Frank Barnaby, a noted British nuclear weapons expert, once believed in the hoax theory but has changed his mind. “I now accept it may be possible to construct a nuclear weapon with this material,” he says. “Statements by officials that dismiss this possibility either mean they are woefully ignorant about red mercury or they are lying to cover up a grave threat to the world.”

Ramaz Tadeyev is scientific director of Alkor Technologies, a flourishing company in St Petersburg that says it has developed the technology to make liquid red mercury. “It can be used to make a nuclear weapon,” he said categorically. “That is why the prices are so high.”

Oleg Sadykov, president of Promecology, a large Russian company based in Yekaterinburg and Moscow with official permission to sell red mercury, is equally certain about the potentially lethal nature of red mercury. “The black market in red mercury for nuclear weapons is a threat to all countries and Russia cannot stop it alone. The West needs to get organised.”

A Russian newspaper has also reported that Valentin Stepankov, the Russian attorney-general, recently met a group of Russian deputies who were concerned about the traffic in red mercury. Stepankov was reported to have told them: “The problem is serious, requiring a full scale investigation.”

What is Red Mercury?

So what exactly is red mercury? According to Scientists in Russia who claim to be familiar with its chemical properties, it combines two important functions in a nuclear weapon by acting as a conventional explosive and a powerful source of neutrons.

In a normal atom bomb, explosives such as TNT are used to produce a powerful implosive force on a ball of plutonium, crushing it so that it becomes an unstable critical mass. An electronic gun mechanism then fires a burst of high-energy neutrons into the plutonium, initiating a fission chain reaction and releasing hughes amounts of energy.

In its basic form red mercury is a powder, but it can be converted into a liquid by pressure and radiation. It then acquires explosive properties and can affect atoms of a variety of elements called actinides that are powerful neutron emitters, substituting for the TNT and the neutron gun and making bomb design much simpler.

This technology, involving a liquid explosive, is apparently unknown in the West, but a scientific paper published in 1968 by Du Pont, the American chemical company which makes explosives for the US nuclear weapons programme, mentions the synthesis of a chemical with the same formula as red mercury.

The compound was made in Du Pot laboratories and added to the international chemical register, where it is still listed as number 20720-76-7. No documentation exists to explain its possible uses and the company was not prepared to comment.

The evidence of the flourishing black market for red mercury is also baffling if the material really is a hoax.

Samples have been confiscated in countries as diverse as Ethiopia, North Korea and South Africa. In almost every instance, the original source of supply has been found to be military plants in Russia.

The official view in Germany, as in the United States and Britain, is that red mercury is a fraud, but police say they have details of 100 deals or attempted deals in the first six months of this year.

It is, however, in Italy – an apparent transit route for the red mercury trade – where the authorities have taken the problem most seriously. Romano Dolce, a judge in the lakeside town of Como, has spearheaded an investigation that has led to the arrest of more than a dozen traffickers.

“All I know is that countries like Libya, Iraq and Iran are buying this material in regular quantities for large sums of money,” he told The Sunday Times. Dolce is also convinced that terrorist states have hired Russian technical experts to begin their own weapons manufacturing programme using red mercury.

Although the International Atomic Energy Authority thinks that red mercury has no nuclear applications, it has revealed that boxes of paperwork on red mercury were found when United Nations nuclear inspection teams raided a building in Baghdad earlier this year.

Apart from a flourishing black market, there is also evidence that officially sanctioned supplies of the chemical are leaving Russia. A list of such transactions, compiled for Russian deputies in Moscow by their civil servants, records more than 30 separate applications for permission to sell consignments of the chemical. Companies in Germany, Britain, the United States, Liechtenstein, Hungary and several Russian regions are mentioned, but it has proved almost impossible to trace them.

Boris Yeltsin, the Russian president, Yegor Gaidar, the acting Russian premier, and Victor Mikhailov, the minister for atomic energy, are also listed as having granted permission.

EXPERTS at Los Alamos National Laboratory, the American nuclear weapons research centre, remain unimpressed. In a paper on the subject, the laboratory said recently: “Careful consideration of the claimed physical properties of the alleged material have led to the conclusion that red mercury does not exist.”

A similar point of view was expressed by Tom Blankenship, an official at the US department of Energy’s office of threat assessment. Blankenship monitors stories about the red mercury trade and believes them to be hoaxes.

However, he added: “I don’t discount that a version of red mercury has some military use, but I don’t believe it is important and I am not sure what it is.”

Britain’s weapons design laboratory at Aldermaston, Berkshire, and the Foreign Office have also expressed scepticism, and British Customs said they had never encountered any samples.

However, Barnaby is not the only independent expert who has doubts about this weight of official denial. John Large, who acts as an adviser on nuclear matters to Greenpeace, accompanied a reporter from The Sunday Times to Ekaterinburg and met a number of experts familiar with the red mercury.

“At first I was completely sceptical. But the more information I have seen makes me doubt this theory. The whole matter needs to be taken quite seriously. “

Dr John Hassard, a lecturer in nuclear physics at Imperial College and an expert in nuclear weapons proliferation, said he also once believed it was a scam. But he added: “I am no longer of that conviction. Clearly there are still doubts but the claims being made from red mercury are not absurd, and it is now imperative that a proper official investigation is conducted into what The Sunday Times has found.”

Dolce says he has failed to get co-ordinated international action and is scathing about the lack of help he has had from other countries and from his own secret service.

“Privately they take a great interest in this traffic, but give me no back-up at all. At the moment the black market is flourishing unhindered.”