Our Boys in Happy Valley

Our Boys in Happy Valley

I could see Cricket and polo pitches, a dry ski slope and an inviting beach of golden sand. 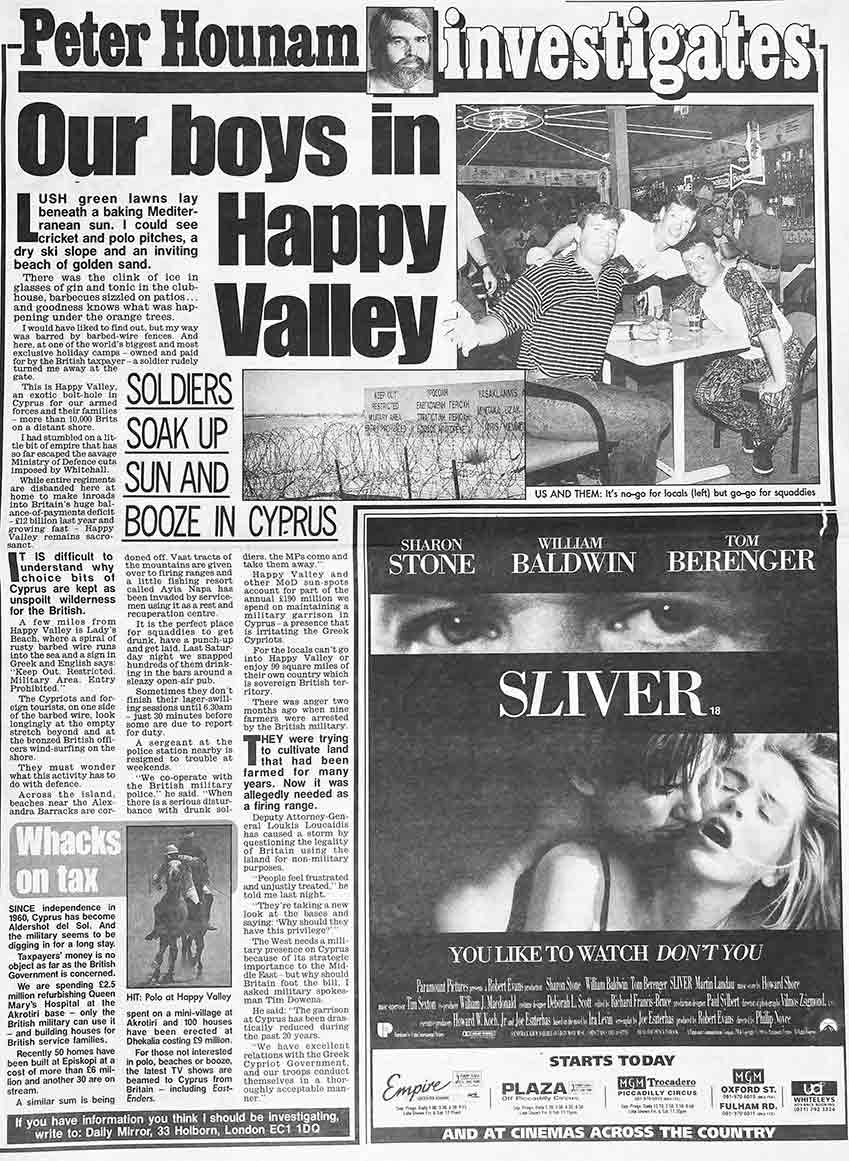 There was the clink of ice in glasses of gin and tonic in the clubhouse, barbecues sizzled on patios… and goodness knows what was happening under the orange trees.

I would have liked to find out, but my way was barred by barbed-wire fences. And here, at one of the world’s biggest and most exclusive holiday camps – owned and paid for by the British taxpayer – a soldier rudely turned me away at the gate.

This is Happy Valley, an exotic bolt-hole in Cyprus for our armed forces and their families – more than 10,000 Brits on a distant shore.
I had stumbled on a little bit of empire that has so far escaped the savage Ministry of Defence cuts imposed by Whitehall.

IT IS difficult to understand why choice bits of Cyprus are kept as unspoiled wilderness for the British. A few miles from Happy Valley is Lady’s Beach, where a spiral of rusty barbed wire runs into the sea and a sign in Greek and English says: “Keep Out. Restricted. Military Area. Entry Prohibited.”

The Cypriots and foreign tourists, on one side of the barbed wire, look longingly at the empty stretch beyond and at the bronzed British officers wind-surfing on the shore.

They must wonder what this activity has to do with defence.

Across the island, beaches near the Alexandra Barracks are cordoned off. Vast tracts of the mountains are given over to firing ranges and a little fishing resort called Ayia Napa has been invaded by servicemen using it as a rest and recuperation centre.

It is the perfect place for squaddies to get drunk, have a punch-up and get laid. Last Saturday night we snapped hundreds of them drinking in the bars around a sleazy open-air pub.

Sometimes they don’t finish their lager-swilling sessions until 6.30am – just 30 minutes before some are due to report for duty.

A sergeant at the police station nearby is resigned to trouble at weekends.
“We cooperate with the British military police,” he said. “When there is a serious disturbance with drunk soldiers, the MPs come and take them away.”
Happy Valley and other MOD sun-spots account for part of the annual £190 million we spend on maintaining a military garrison in Cyprus – a presence that is irritating the Greek Cypriots.

For the locals can’t go into Happy Valley or enjoy 99 square miles of their own country which is sovereign British territory.

There was anger two months ago when nine farmers were arrested by the British military.

They were trying to cultivate land that had been farmed for many years. Now it was allegedly needed as a firing range.

Deputy Attorney-General Loukis Loucaidis has caused a storm by questioning the legality of Britain using the island for non-military purposes.
“People feel frustrated and unjustly treated,” he told me last night.
“They’re taking a new look at the bases and saying: ‘Why should they have this privilege?’”

The West needs a military presence on Cyprus because of its strategic importance to the Middle East – but why should Britain foot the bill, I asked military spokesman Tim Dowens.

He said: “The garrison at Cyprus has been drastically reduced during the past 20 years.
“We have excellent relations with the Greek Cypriot Government, and our troops conduct themselves in a thoroughly acceptable manner.’