Inside The Secret Sect Preying on Britons

Inside The Secret Sect Preying on Britons

THE embers of the Waco inferno are barely cold but I can reveal that another American sect is on the same destructive path — and it is recruiting in the heart of Britain.

The Church of Christ movement, which preaches that all converts must be “ready to die”, is using London’s world-famous Leicester Square Odeon cinema as a base to add to its ever-swelling numbers.

Odeon manager Bill Weir even came on stage to thank cult members for backing a cinema charity at a recent meeting attended by Daily Mirror reporters.

The Boston-based movement is controlled by “Apostle” Kip McKean.

Like David Koresh’s Branch Davidian sect in Texas, where 27 Britons perished, McKean’s movement has an obsession with guns, fire and damnation.

In public iG world leaders — or “evangelists” profess a love of God. Secretly they prefer power and money.

IN Britain the church, founded by American Douglas Arthur, is a registered charity with 5,000 members and branches in major cities. It has a turnover of 21.2 million.

Complaints abound of brainwashing, blackmail and financial skuldug-gery. Yet management at the Odeon — flagship cinema of the Rank Organisation — display alarming innocence about recruiting activities.

“The Church assures us that any allegations are unfounded,” says a spokesman. 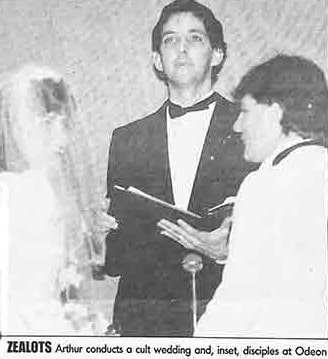 The Rank Organisation should reflect on what I have uncovered from former senior figures in the cult such as Daniel Eng, He says he was ordered to take part in paramilitary games using paintball guns that fire ink at enemy targets. ‘ “The evangelists would dress in camouflage uniform,” reveals Eng. “It’s all part of teaching the cult’s leaders to become ruthless, vicious and competitive.” In Britain, the cult’s top brass conduct mock battles at sites in Hampshire and Kent. Eng also reveals how he was ordered to marry another member.

When he refused, they said: “What’s wrong with you? Is it because Agnes hasn’t got big breasts?”

Eng’s rebellious behaviour forced him out but his allegations have been confirmed by other former adherents.

NEW recruits must make lists of sins committed in the past, they say.

These are stored and used to blackmail anyone of importance who threatens to leave. Ayman Akshar and his wife Jane have left the cult and are fighting to expose its financial abuses. In a document sent to the Charities Commission he alleges: “Lots of money has gone missing and no action has been taken.”

Much of the cash raised in Britain goes to paying the cult’s top people, says Akshar. One senior evan-gelist admitted to me he was on a $55,000 salary.

The Inland Revenue, the Charities Commission and the Home Office are now investigating some of these matters including the documentation I have unearthed.

However, it is the cult’s hold on young people that is most disturbing At a London meeting Douglas Arthur talked repeatedly of the earth being consumed by fire and quoted Luke 12.49: “I have come to bring fire to the earth, and I how I wish it were already kindled.” Douglas Arthur denied the cult had an undue hold on young people. ‘Some parents are over-possessive on religious matters,” he said.

“We are an extremely zealous, fundamental, Christian organisation.”