DISGRUNTLED printworkers and a freelance journalist were last night at the centre of the molehunt over the Budget leaks.

Investigators were focusing on staff at the newly privatised Stationery Office, which printed all the documents handed to the Daily Mirror on the eve of the Chancellor’s Budget statement.

Last week 900 redundancies at the Stationery Office — formerly HMSO — were announced. A leak by workers there determined to embarrass the Government was therefore considered the likeliest explanation by the Whitehall inquiry team. 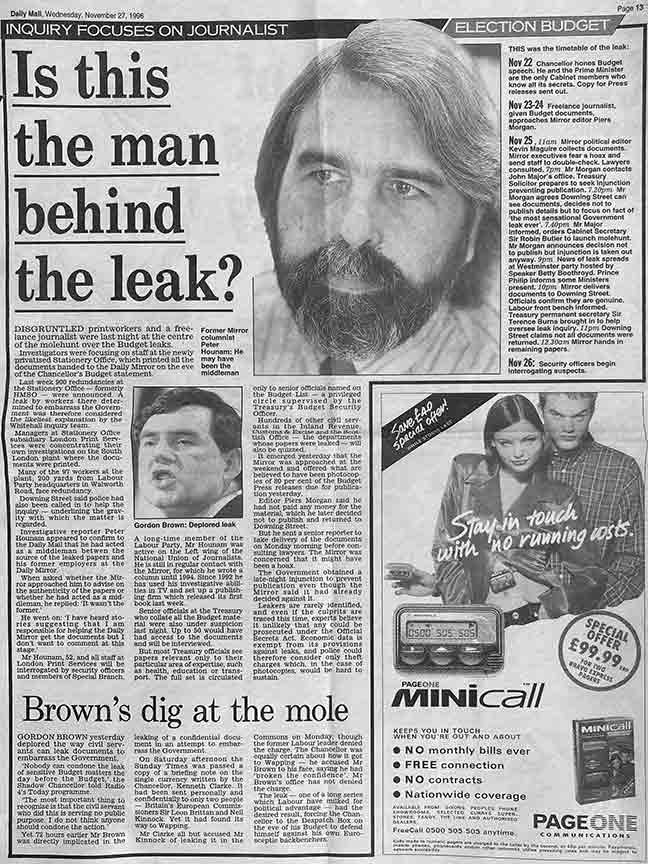 Managers at Stationery Office subsidiary London Print Services were concentrating their own investigations on the South London plant where the documents were printed.

Downing Street said police had also been called in to help the inquiry — underlining the gravity with which the matter is regarded.

Investigative reporter Peter Hounam appeared to confirm to the Daily Mail that he had acted as a middleman between the source of the leaked papers and his former employers at the Daily Mirror.

When asked whether the Mirror approached him to advise on the authenticity of the papers or whether he had acted as a middleman, he replied: ‘It wasn’t the former. ‘He went on: ‘I have heard stories suggesting that I am responsible for helping the Daily Mirror get the documents but I don’t want to comment at this stage.’

Mr Hounam, 52, and all staff at London Print Services will be interrogated by security officers and members of Special Branch.

A long-time member of the Labour Party, Mr Hounam was active on the Left wing of the National Union of Journalists.He is still in regular contact with the Mirror, for which he wrote a column until 1994. Since 1992 he has used his investigative abilities in TV and set up a publishing firm which released its first book last week.

Senior officials at the Treasury who collate all the Budget material were also under suspicion last night. Up to 50 would have had access to the documents and will be interviewed.

But most Treasury officials see papers relevant only to their particular area of expertise, such as health, education or transport. The full set is circulated only to senior officials named on the Budget List — a privileged circle supervised by theTreasury’s Budget Security Officer.

Hundreds of other civil servants in the Inland Revenue, Customs & Excise And the Scottish Office —the department whose papers were leaked — will also be quizzed.

It emerged yesterday that the Mirror was approached at the weekend and offered what are believed to have been photocopies of 80 percent of the Budget press releases due for publication yesterday.

Editor, Piers Morgan said he had not paid any money for the material, which he later decided not to publish and returned to Downing Street. But he sent a senior reporter to take delivery of the documents on Monday morning before consulting lawyers. The Mirror was concerned that it might have been a hoax.

The Government obtained a late-night injunction to prevent publication even though the Mirror said it had already decided against it.

Leakers are rarely identified, and even if the culprits are traced this time, experts believe it unlikely that any could be prosecuted under the Official Secrets Act. Economic data is exempt from its provisions against leaks, and police could therefore consider only theft charges which, in the case of photocopies, would be hard to sustain.