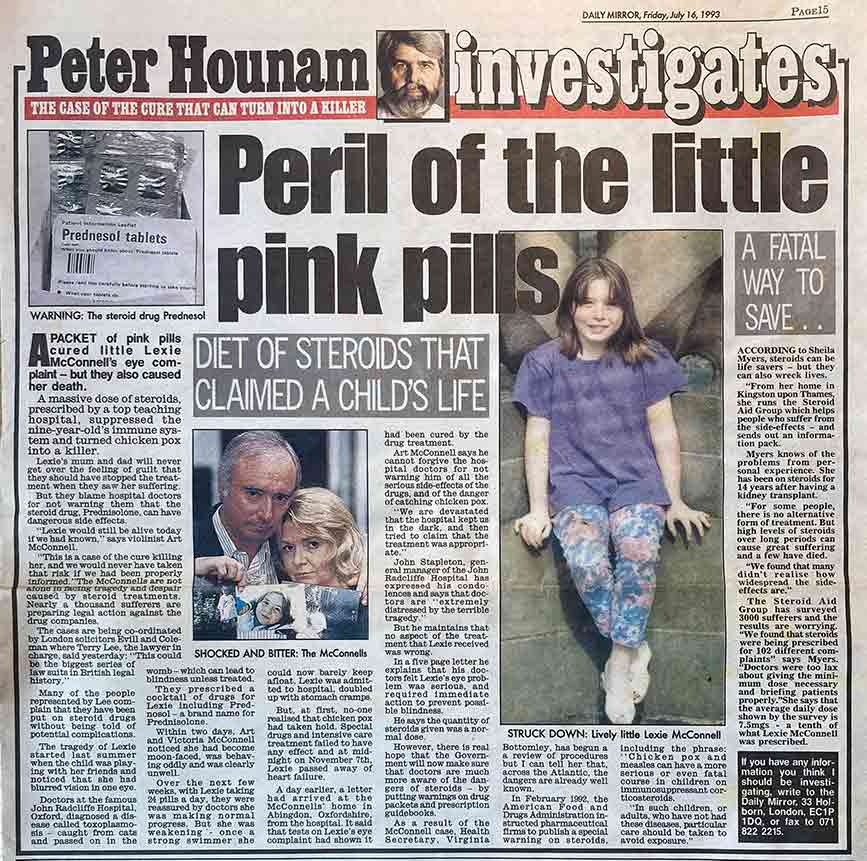 A massive dose of steroids, prescribed by a top teaching hospital, suppressed the nine-year-old’s immune system and turned chicken pox into a killer… Lexie’s mum and dad will never get over the feeling of guilt that they should have stopped the treatment when they saw her suffering.

But they blame hospital doctors for not warning them that the steroid drug  Prednisolone, can have dangerous side effects.

“Lexie would still be alive today if we had known,” says violinist Art McConnell.

“This is a case of the cure killing her, and we would never have taken that risk if we had been properly Informed.”

The McConnells are not alone in facing tragedy and despair causéd by steroid treatments. Nearly a thousand sufferers are preparing legal action against the drug companies.

The cases are being coordinated by London solicitors Evill and Coleman where Terry Lee, the lawyer in charge, said yesterday: “This could be the biggest series of lawsuits in British  legal history.”

Many of the people represented by Lee complain that they have been put on steroid drugs without being told of potential complications.

The tragedy Of Lexie started last summer when the child was playing with her friends and noticed that she had blurred vision in one eye.

Doctors at the famous John Radcliffe Hospital, Oxford. diagnosed disease called toxoplasmosis — caught from cats and passed on in the womb —which can lead to blindness unless treated.

They prescribed a cocktail of drugs for Lexie including Prednosol — a brand name for Prednisolone. Within two days, Art and Victoria McConnell noticed she had become moon-faced, was behaving oddly and was clearly unwell.

Over the next few weeks, with Lexie taking 24 pills a day, they were reassured by doctors she was making normal progress. But she was weakening – once a strong swimmer she could now barely keep afloat. 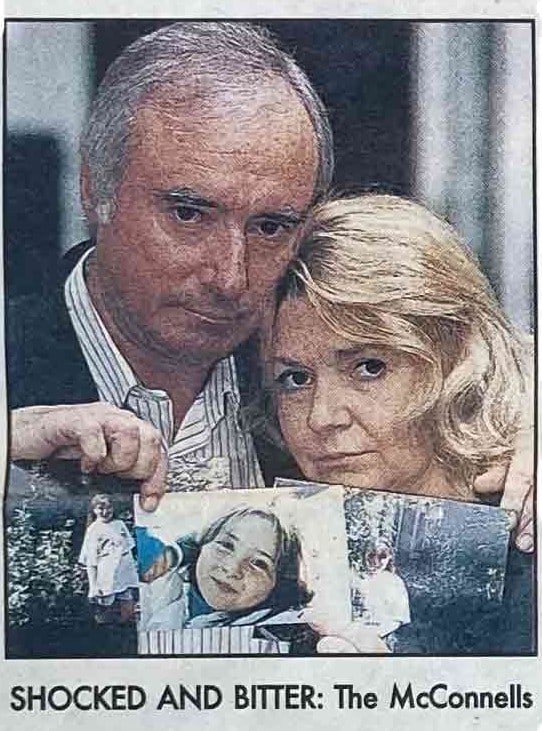 Lexie was admitted to hospital doubled up with stomach cramps.

But, at first, no-one realised that chicken pox had taken hold. Special drugs and intensive care treatment failed to have any effect and at midnight on November 7th, Lexie passed away of heart failure.

A day earlier, a letter had arrived at the McConnells home in Abingdon, Oxfordshire, from the hospital.

It said that tests on Lexie’s eye complaint had shown it had been cured by the drug treatment.

Art McConnell says he Cannot forgive the hospital doctors for not warning him of all the serious side-effects.of the drugs, and of the danger of catching chicken pox.

“We are devastated that the hospital kept us in the dark, and then tried to claim that the treatment was appropriate.”

John Stapleton, general manager of the John Radcliffe Hospital has expressed his condolences and says that doctors are “extremely distressed by the terrible tragedy.”

But he maintains that no aspect of the treatment that Lexie received was wrong.

In a five page letter he explains that his doctors felt Lexie’s eye problem was serious and required immediate action to prevent possible blindness.

He says the quantity of steroids given was a normal dose. However, there is real hope that the Government will now make sure that doctors are much more aware of the dangers of steroids — by putting warnings on drug packets and prescription guidebooks.

As a result of the McConnell case Health Secretary, Virginia Bottomley, has begun a review of procedures but I Can tell her that, across the Atlantic the dangers are already well known. In February 1992, the American Food and Drugs Administration instructed pharmaceutical firms to publish a special warning on steroids, including the phrase; “Chicken pox and measles can have more serious or even fatal course in children on immunosuppressant corticosteroids.”

“In such “children or adults, who have not had these diseases, particular care should be taken to avoid exposure.”

A Fatal Way to Save

ACCORDING to Sheila Myers, steroids can be life savers – but they can also wreck lives.

From her home in Kingston upon Thames, she runs the Steroid Aid Group which helps people who suffer from the side-effects – and sends out an information pack.

Myers knows of the problems from personal experience. She has been on steroids for 14 years after having a kidney transplant.